It was chilly again this morning when we left Albergue San Pelayo but not cold enough for Linda to borrow Jim’s golf/trekking pole gloves like yesterday morning.

We walked a km on the sidewalks of Villarente until veering off onto a dirt path that worked its way between two León bound highways. We stopped at the village of Arcahueja to give some business to the only bar/albergue open at 8:30.

Over the next three miles we gradually climbed upward until we were able to see León and then crossed over N-601 on a most unusual bright blue pedestrian bridge.

Once over the bridge we walked a few 100 yards on a path again, crossed another pedestrian bridge over highways and then began walking on a sidewalk thru one residential area after another then thru the community of Puente Castro.

As we were about to cross the Río Torio into León we were welcomed by a contingent of civil guardia officers and given a nice map, directions to various landmarks and sleeping options if needed or directions to our hotel and finally offered a piece of hard candy. A really nice way for these two pilgrims to be introduced to León.

Today was a “working day” of sorts in addition to our normal routine. First, we needed to get more euros from an ATM. Second, we needed to collect our extra items from the hotel office which we mailed from Pamplona over a month ago. Third, we needed to inventory our mailed stuff along with our back pack stuff and decide what we needed to carry in our backpacks from here on to Santiago. Fourth, we needed to put the items that didn’t make the new backpack list into a box and take them to the post office (Correos) and mail them on to Santiago ahead of us. Finally, we needed to make reservations for our next two nights on the Camino.

But first, we walked only a few blocks away from our hotel to visit the Catedral de Santa María of León,

known for it’s magnificent stained glass windows from the 13th-15th century. Unlike many of the beautiful Catedrals and Iglesias we have visited along the Camino, this one doesn’t have an extraordinary retablo. Instead, especially on a day like today, the bright sunlight made the beautiful colored glass even more brilliant inside.

No matter where you looked, stained glass dominated this impressive gothic masterpiece begun in 1205 and completed in record time (a hundred years later).

León (pop.134,305) began as a Roman military encampment in 29BC and developed into a permanent settlement charged with protecting Galician gold on its journey to Rome. Visigoths took the city in 585, only to lose it to Muslim invaders in 712. The city was reconquered by Ordoño I around 850, who initiated a building boom and welcomed Mozárabic refugees (Christians living under Muslim rule). The city was leveled in 988 by Al-Mansur’s troops. Rebuilding began soon after, and León flourished as a wool industry center. In 1188, the city hosted the first Parliament in Europe under Alfonso IX and became wealthy enough to construct the astonishing cathedral. 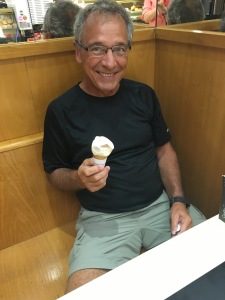 treated ourselves to ice cream dessert after dinner before returning to our room for the day.