Our view as we walked this morning was pretty much the same:

Just as we left Población Jim began walking with a guy from Germany who had left his job and was using the Camino as a way to decide the direction for his life forward. He and Jim walked a little faster than Linda, who gradually drifted behind.

But another peregrina, a young lady originally from South Korea and currently working as a tour guide in Madrid, joined Linda as their paces pretty much matched.

Eunji, spoke very good English and after a while, the subject of our Orange sim card problem came up. (If you remember, Linda and I talked about trying to find someone in Carrión tomorrow that spoke enough English and Spanish to understand our problem and possibly help us with a solution.)

At the next village we stopped at an unusual albergue that offered accommodations ranging from bunk beds to teepees! Also, huge ducks, chickens (one looking at itself in a mirror in the bar), donkeys, llamas, sheep, goats and countless other fauna unseen.

During breakfast, Eunji offered to help us and 20 minutes later, we had renewed our sim cards and recharged them for another 30 days! Problem solved!

Eunji had used her Orange account to access our phones and pay the renewal fee for both our phones with her credit card. When we gave her a 50€ bill to cover the 40.20€ charges she initially refused, but we insisted and suggested she enjoy her dinner tonight on us with our thanks for her timely and “priceless” assistance.

We walked on separately and eventually approached our destination for today:

As usual, we were too early to checkin, so we found the nearest bar and had mid-morning chocolate cake and CCL while we waited. 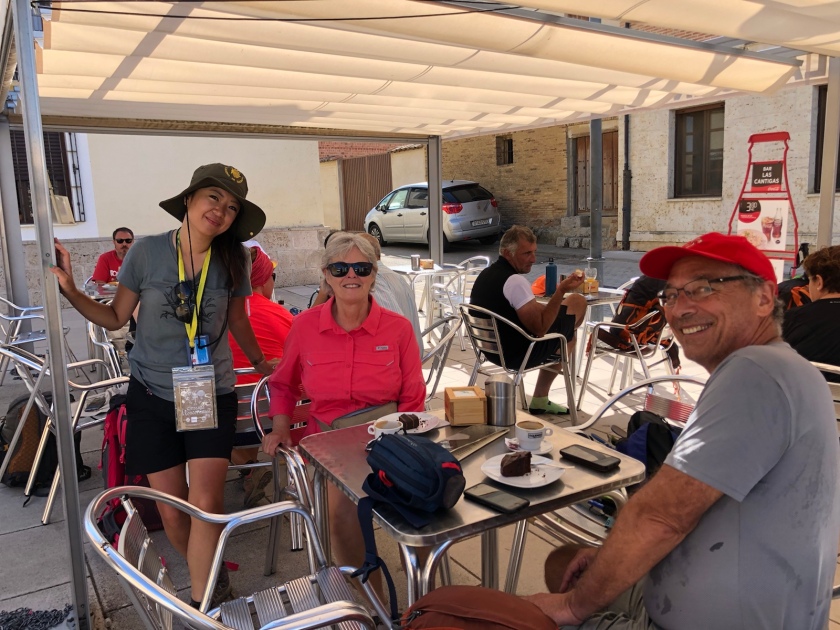 Eunji spotted us from a nearly table for another photo op, before parting again as we wished each other a ” buen Camino “.

It was still early for checking in, so we noticed someone unlocking the door to the 13th century Iglesia de Santa María la Blanca.

According to tradition, Villalcázar was under the protection of the Knights Templar. The Camino did not originally pass through this town, but later detoured when the fame of the Virgen Blanca (” white virgin”) and her many miracles spread.

The church’s 1530 retablo has scenes from the life of Saint James, including his legendary run-in with the magician Hermogenes, who later converted to Christianity and burned his magic books.

At about 11:30 we gained access to our room, which is roomy and comfortable with extra seating in a nice, cool (even in the 95F afternoon, w/o AC) common area.

We relaxed until around 2:00, then returned to our mid morning snack place to have a nice lunch/dinner.

We returned to the neighborhood bar around 5:30, still pretty full from our earlier meal, needing to put an appropriate end to our day’s culinary experience, and ordered Postres (dessert), in this case, apple tarts then returned to our room to end another day on the Camino Frances.