Walking out of Sahagún this morning, we passed this cross and walked over the Puente de Sahagún (background), built by the Romans but refurbished some 250 years ago.

The walk this morning was on dirt paths parallel to a busy two lane highway and later parallel to a much smaller, almost no-traffic secondary road.

Nice treelined path along the road

As we are getting closer to León, and the end of the Meseta many of the dirt paths are tree lined, which provides much needed shade if walking in the afternoon sun.

Most of these trees are a relatively new addition to the Camino Frances, probably planted over the past 30 years, coincident with the Camino de Santiago’s renewed popularity which began in the mid-1980’s.

If you follow the Camino on Google Earth you can see fuzzy smudges along the roads which are shadows of the trees which shade the Way.

Today’s route splits a couple of miles from Sahagún into a route with no facilities and though a bit shorter, no place to stop for the night without walking nearly 10 miles. The second route, which is the original Camino route, has places to stop. Bet you can guess which route we took.

But our guide directions were not the best and we almost took the wrong turn. We actually did for a 100 yards or so, but were waved down by a local lady out for her morning walk. Frantically and in excited, but very clear and concise Spanish, no doubt, she explained that someone had painted over the arrow marking our route.

Like the Pied Piper, we and by now, another 5 or 6 pilgrims followed our leader until we reached the correct turn off.

We all thanked her profusely to her repeated, ” de nada’s” as she continued along her morning walk.

An hour later, apparently on her return trip, we each greeted her again like an old friend, thankful that she had made our morning much less of an unwanted adventure.

Treelined path, nice shade as we head under train track

Walking up to Albergue La Perala, we were not surprised at its similarity to Albergue los Templarios, where we stayed two nights ago. 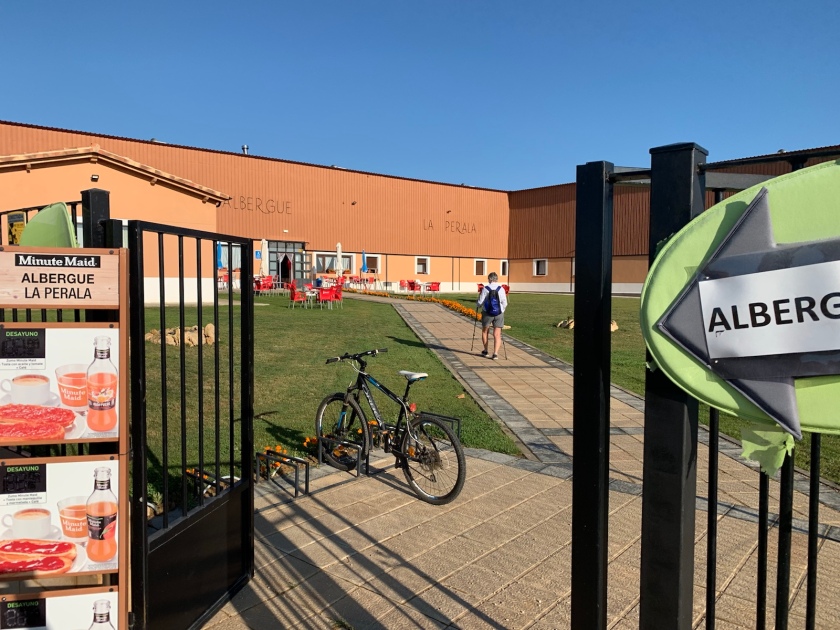 They are both owned and run by the same family. La Perala was opened in 2017 and Los Templarios was opened in 2006. They both are well run, great places to stay, very customer oriented and competitively priced (38€).

It was only 9:45 when we arrived, but we were starved and ready for breakfast. We stretched it out for a half-hour or so before trying to checkin.

In the meantime, we chatted with a guy who we’ve seen from a distance and “buen Camino’d” a time or two, but not had an opportunity to talk. We had overheard him speaking English and were curious. It turns out his name is Timothy, he’s originally from Washington, currently lives in Burgos because he loves the Camino. He is developing an app for pilgrims to connect while walking the Camino, then maintain the connection via the app after returning home.

Our fellow pilgrim, Timothy, before he left to continue walking.

We had a salad for lunch, worked on the blog, machine washed and hung clothes out to dry in the sun (bone dry in 45 minutes), made reservations for the next week after planning our walks, and did some reading (Linda)…

Today was a relatively easy day after the longer than usual walks of the previous two days. We’ve never taken a day “off” while on the Camino, preferring to maintain some minimum activity each day so we don’t lose our momentum. Our 5.9 mile walk today and the 5 plus mile walk tomorrow is our way of avoiding what could have been a difficult 11 mile walk, by splitting it into two light days, but still making good progress toward Santiago.

Dinner was available in La Perala at 6:00 (earliest time so far on the Camino), another nice feature.

We had a routine two course dinner, nothing extraordinarily culinary to report, but certainly tasty, nutritious and enough to keep us going another day.

We finished the day with a hotly contested game of hand and foot. Results to be reported at a later date.