It was still dark when the taxi dropped us off in Virgen del Camino, a suburb of León.

We figured today would be an uneventful walk along a busy secondary road, fronting the autovia.

Well, it was, if you discount the older (older than us) fellow pilgrim who we encountered leaving Virgen del Camino and was trying to determine which direction to go of three choices. We didn’t understand his language but our version of Spanish/English seemed to help him out and he walked with us for a bit. He had previously done a pilgrimage to Rome and had climbed Mount Kilimanjaro. He was Russian and lives in Moscow. He was walking to Santiago, taking the bus to Finistere, walking back to Santiago, then working his way back home via train/plane. He was walking faster than we were, so we wished each other well and off he went.

So we had an interesting start for what we expected would be an uneventful day walking along the road. A few minutes later, Linda heard a strange noise behind us, said it sounded like the clomp, clomp of a horse. It was still hard to see, but she thought it looked like a horse had stopped in the path behind us. A few steps later a pilgrim walked past us, followed by very handsome looking horse carrying the pilgrim’s gear.

As the guy passed us, he didn’t say anything except, “he keeps following me”, in perfect English.

The horse walked around us and once he was clear of us moved back into the path behind the guy he was following… much more safely and considerate than many of the cyclists we’ve encountered in the past few hundred miles!

We followed the pair through an underpass, and noticed for the first time, the horse’s flashing tail light, his clog like shoes with buckles and other than periodic piles of equestrian evidence observed along the way, we never saw them again.

We stopped in Valverde del la Virgen at a new store that we don’t remember seeing in 2017. It had a limited selection of items but did offer a small CCL and Santiago tarta (a Camino almond cake), which was homemade by the owner’s wife. 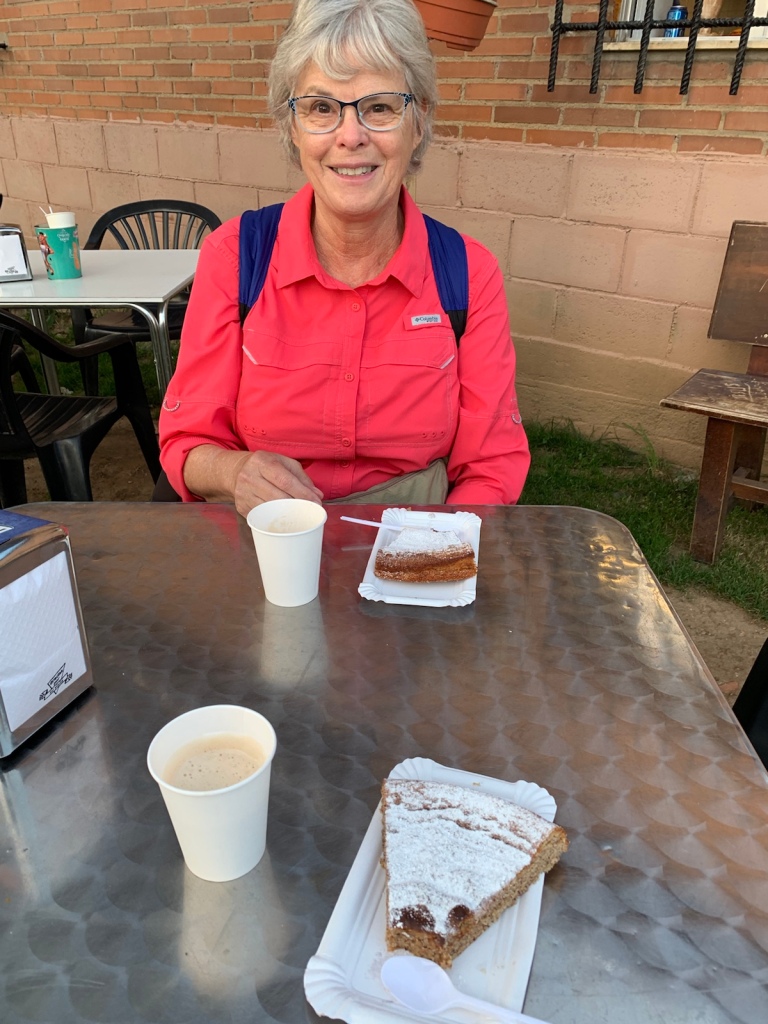 Patronizing a new business on the Camino

We stopped for a brief breakfast, asked the owner to pass on our compliments to the “chef”, then moved onward.

We stopped at the next village, San Miguel del Camino and had a normal breakfast at a charming cafe.

We walked on, along the road, then the path took us away from the road a few feet (we could still hear the cars and trucks) to walk among some bodegas ( individually owned, wine cellars) for a few hundred yards … 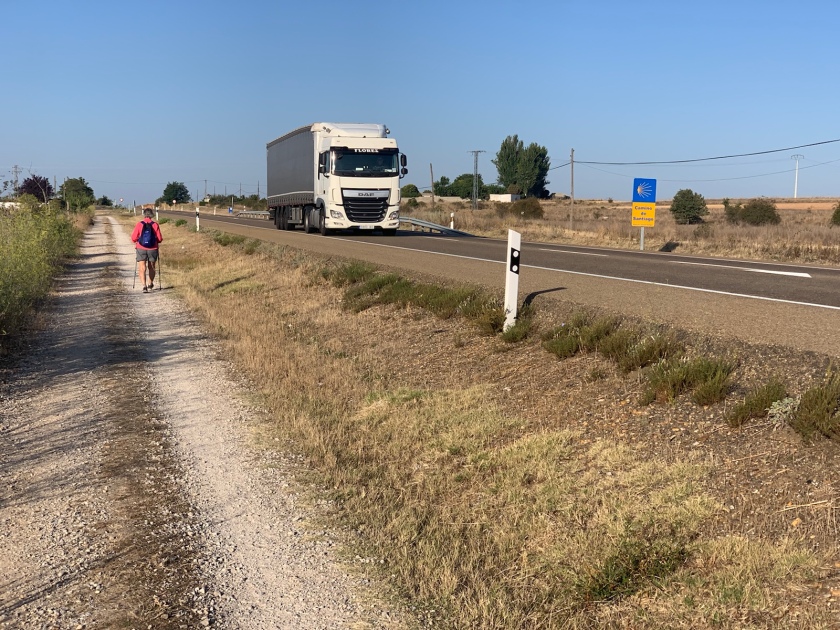 Back along the road

… then back along the road again.

We made one last stop at a hotel/truck stop/restaurant a mile from our destination, only to cool our feet a bit and get out of the ever increasing heat of the rising sun.

After the last mile into Villadangos del Páramo we arrived at Hostel Libertad (50€) and at 11:15 were checked in immediately. 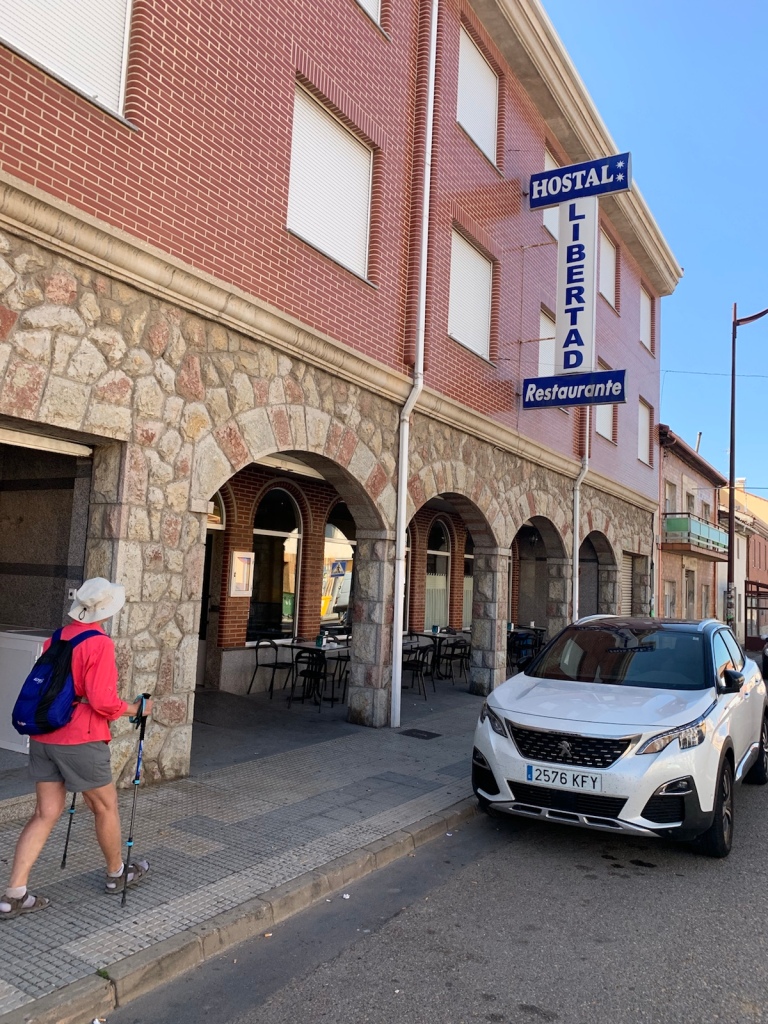 Chores detail: Since this is not an albergue, there was no clothesline or washing machine, so we washed and rinsed our sweaty/dirty stuff in the bathroom sink, wrung the water out by hand, then laid the wet clothes onto a dry towel and rolled the towel, squeezing it tightly, absorbing and extracting additional moisture, then hung the clothes on any hanger, doorknob, chair, tv, light fixture or window we could find and within a couple hours, everything (shirts, shorts, underwear, socks, etc.) was dry, clean and ready to wear tomorrow.

After doing our chores we had a meal in the hostal at 2:00 to serve as lunch/dinner, which is getting to be a habit.

Linda was served an unusual version of “minestrone soup” that was very delicious, but much more than she could possibly consume in a single meal. 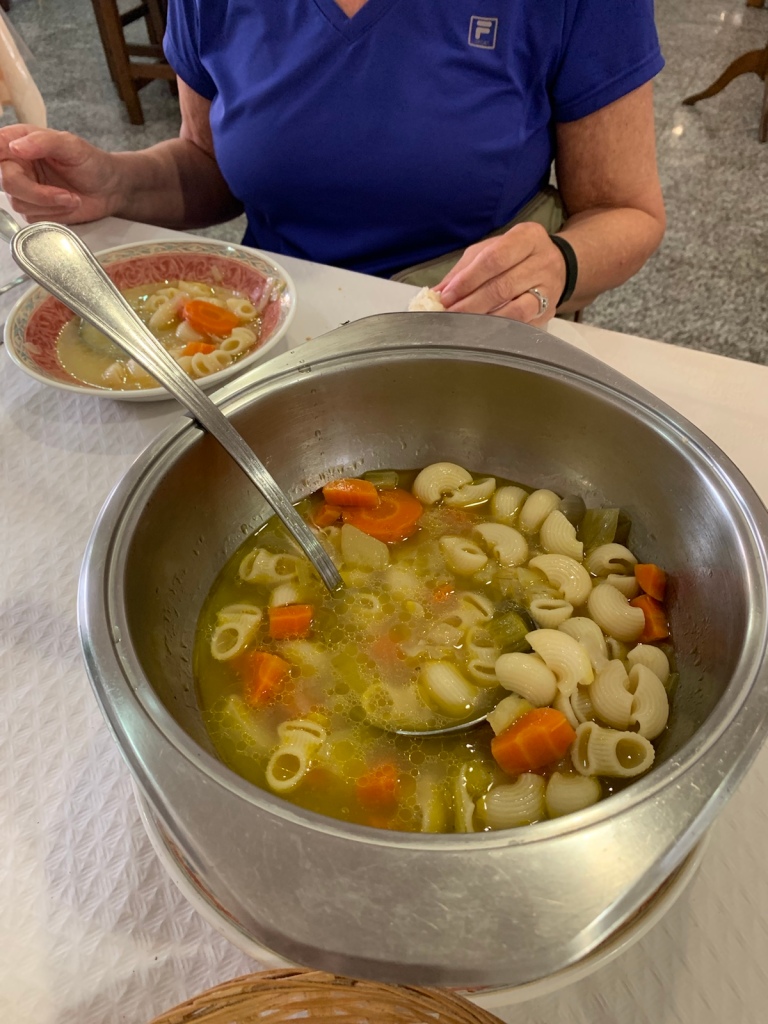 And we sampled a Menćia wine for building a sampling base as we head into the Bierzo wine region over the next few days.

Overall, our uneventful day walking along the road turned out pretty well.