At 6:13 it was dark, so headlamps were called for. 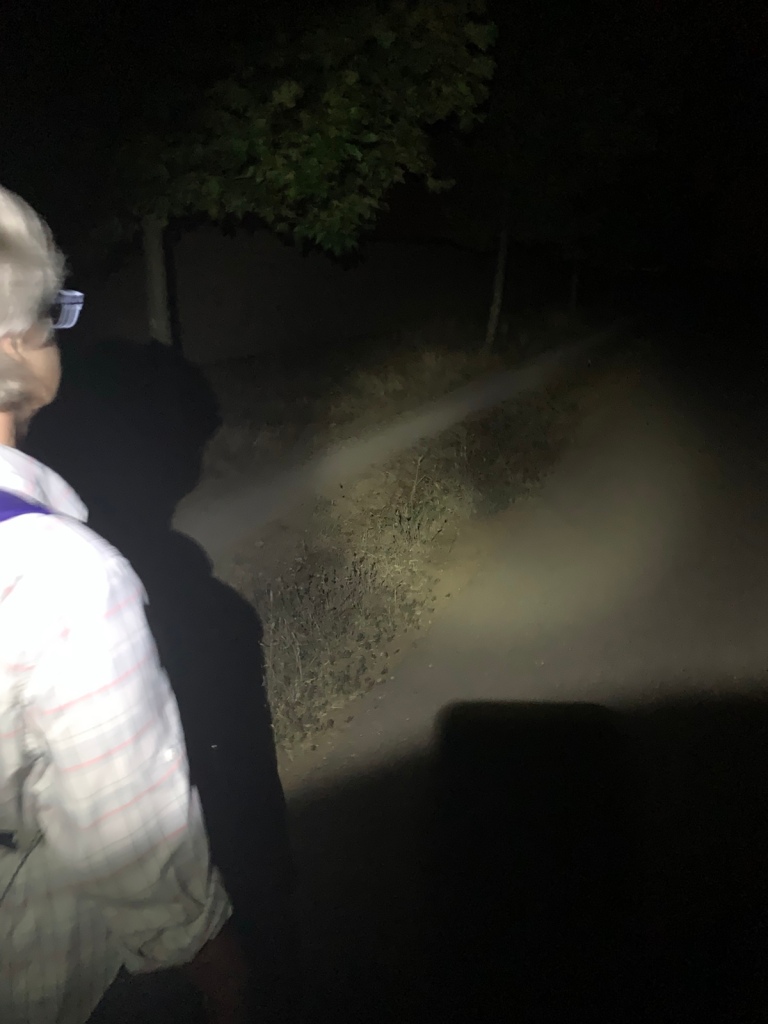 Walking the Camino in the dark

We walked in the road for about an hour, the path to our left. (Didn’t want to step on a critter that assumed no self respecting pilgrims would be out at this hour)

We get into “walking-in-dark” mode whenever we’re facing a longer walk, especially one with no services along the way. Linda thinks it makes the walk easier. Jim agrees it seems easier, but only because he’s usually still asleep for the first few miles, which theoretically don’t count.

Walking in the road wasn’t a problem since there were no cars out either. We actually passed one pilgrim who had started sooner than us (if she walked slower than us, she’d have to start early!)

We no longer needed the headlamp at first light (duh), after nearly 2.5 miles under our belt.

We had the Camino to ourselves for the first 4 miles…

… and nothing behind us but the Sunrise.

Our first pilgrims of the day at nearly 8:00

Our first scenery change came after walking in a straight line for nearly 7 miles.

This curve was a real event after the monotony of the first 7 miles.

Today’s walk was a little longer than average but not a difficult one.

We stopped for breakfast at the first bar on the edge of Reliegos (pop.237) then walked into the village to albergue Gil(35€).

We couldn’t checkin until noon, so we sat on a bench in the shade in a small park across the street and got a head start on the blog, checking mail, etc.

Gil (pronounced “hill”) is an albergue with one habitacion doble con baño, which is also outfitted as a handicapped room. It actually is good for us, because it is a larger room with a larger bathroom/shower. This is the third “handicapped” room we’ve been given so far. Maybe they’re trying to tell us something.

We had lunch at 2:00 in the albergue bar/restaurant. It was a routine meal of fried eggs, ham and potato fries, but a bit different as the fries were cubes instead of french cut and it was served on an unusual plate.

It’s our Camino go-to-meal for nutrition and comfort. It’s never available for breakfast, only lunch or dinner.

There’s not much to see in Reliegos of any significance. It was originally the Roman town of Palantia, at the convergence of three military roads and more recently was struck by a 38 lb meteor in 1947 and that’s about it.

So we just chilled for the afternoon and tried to nap, doubting any new meteors would strike before we were on our way in the morning.

Well, its 6:30 and we’re skipping dinner again. Eating mid-afternoon then chillin for a while does something to the appetite. I wonder if that will work back home?

That’s all for us today on the Camino Frances.