Soon after leaving Cirueña, we began a walk through grain fields for nearly an hour.

After about 3 miles, we could see the buildings and Cathedral tower of Santo Domingo de la Calzada. Off to our right was a large field of potatoes and in the distance, a flock of hot air balloons descending to a nearby airfield. 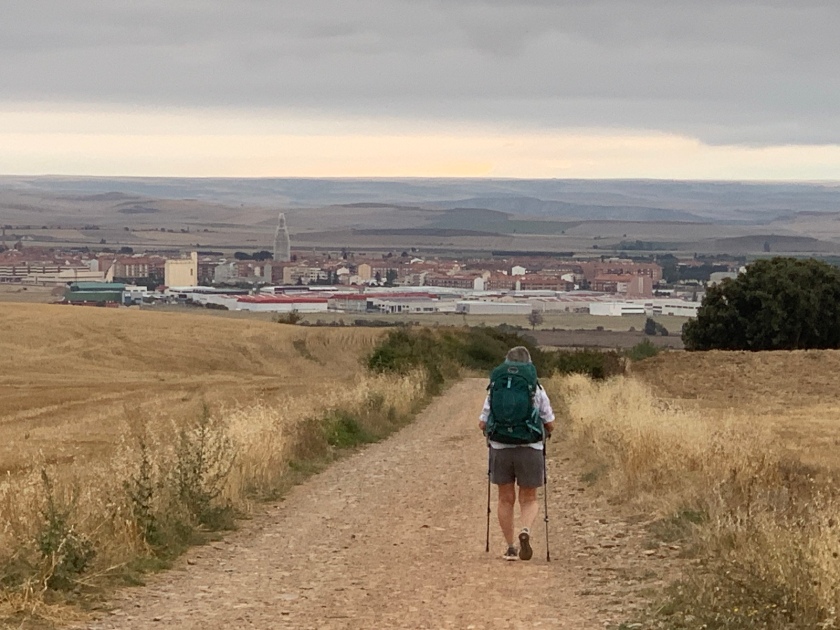 We next walked by a series of warehouses and processing facilities of some sort, then observed hundreds of stacked crates with evidence of the likely product… potatoes.

We next walked into Santo Domingo de la Calzada (pop. 6231) and then entered a walk street which took us to the Cathedral and the old city.

We stopped for breakfast at a bar next to the Cathedral and then walked on to our hotel, El Molino de Floren.

We were early, but the owner allowed us to wait in the lobby or restaurant until our room was ready. We opted for the restaurant and he prepared two cafe con leches for us.

The young family at the next table seemed interested in us and guessed we were doing the Camino. So we initiated a conversation and we had a delightful exchange for the next hour or so.

The family was from Valencia and was on a three day holiday to walk part of a hiking trail mostly in the nearby mountains. The dad spoke a little English, but we soon learned that the 10 year old daughter was taking English in school, so we encouraged her do the translating and, as needed, supplemented our conversations with itranslate.

It was a really wonderful experience and we gave them our blog info, so they could follow us if they wanted.

Our room was ready around 11:30 and shortly thereafter we went back to our breakfast spot, about a 3 minute walk away, and had lunch.

A nice room with ensuite bathroom in our boutique hotel

After lunch we searched for a popular snack called “ahorcaditos” or Little Hanged Man, which we”ll explain later.

Ahorcaditos, sweet almond creme pastries in shape of shell, a disappointment, but now we know.

Santo Domingo de la Calzada takes its name from Dominic Garćia, born in 1019 in nearby Viloria de la Rioja. He cared for and developed sections of the Camino in this area in the 11th century including building bridges and clearing the road.

Myths and legends abound about the saint, such as when he was clearing the forest he fell asleep and angels picked up his scythe and miraculously continued clearing! He also brought a pilgrim back to life that had been hit and killed by an ox cart.

The most famous legend associated with Santo Domingo is “the hanged innocent.” A German family (father, mother and their son, Hugonell) were on the pilgrimage to Santiago. In Santo Domingo they stayed with a farmer’s family, and the farmer’s daughter tried to seduce Hugonell but, as a pious pilgrim, he refused her. She became so angry that she hid some silver items in his pack and after he left, called the authorities and accused the boy of theft. Upon finding the items in his pack, the boy was found guilty and hanged.

His grief-stricken parents continued to Santiago, but stopped to see their son’s remains on the return journey (thieves were left to rot on the gallows as a warning to others). They were delighted to find that he was still alive, claiming that Santo Domingo had held him up so he did not die. The parents hurried to the magistrate and asked them to cut down their son, as he was clearly innocent. The magistrate, who had just sat down to a hearty chicken dinner, shouted, “Why, he is no more alive that this roasted chicken I’m about to eat.” At this, the cooked chicken stood up on his plate, miraculously brought back to life feathers and all, and crowed.

In remembrance of this story, live chickens are kept in the   Cathedral which are said to be the descendants of the resurrected fowl in the story. A piece of the gallows is displayed over the cage housing the chickens.

Saint Domingo died in 1109 and was buried in the small church he built on the Camino, which grew into today’s Cathedral that houses his tomb.

Tonight we had a tasty dinner in the hotel restaurant. Linda had chicken paella and very tender pork with rice pudding for dessert. Jim had lentil soup and beef stuffed relleños peppers and an ice cream tart. The wine was local and also quite nice.

We retired to our room after finishing dinner at 8:30 and called it a day.