Melide was foggy this morning and rain looked eminent so Jim put on his pack cover and Linda removed her raincoat from her pack before leaving it at the hotel for transport today to Arzuá.

Like several other days on Camino 2017, the rain never materialized but the fog and heavy clouds persisted for the entire morning.

Today’s walk was uneventful. We spent the time either walking up or down hills through farms and eucalyptus forests with scattered level stretches.

Jim went with sandals again today to help his toe, but after the 9 mile walk yesterday, the bottom of his feet, missing the extra cushion provided by boots, began to rebel by sending feedback in the form of hotspots, a random pain here and there or general tenderness. The number one rule of the Camino is take care of you feet and after 64 successful days without major feet issues, Jim changed back into his boots at our breakfast stop in Boente (pop. 137).

For the remaining 5.5 miles he babied the toe with some difficulty during the hilly walking, especially the downhills, but made it to Arzuá, with tired but still willing feet, anxious to continue for the remaining days to Santiago.

We made an OJ stop in Castañeda (pop. 157) and chatted with a 76 year old Norwegian guy who had walked from Sevilla and joined the Camino Frances in Astorga. 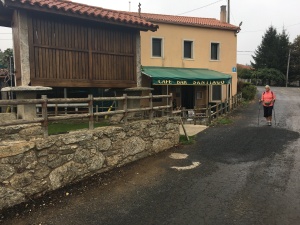 He then met up with his girlfriend in Sarria and they were walking together to Santiago. He has a second home in southern Spain, where he lives except for the summers when he returns to Norway when it’s not so cold. (Sound like a European equivalent of a “snowbird”?)

Arzuá (pop. 6328) is in the heart of Galician dairy country and is well known for its rich, creamy cheese. We’ve tasted it before and like not only the creamy texture but the rich, cheddar taste. Needless to say we procured a supply for lunch and afternoon snacks today and we’re not disappointed.

Arzuá was previously known as Villanova, and evidence exists of both pre-Roman and Roman settlement nearby. When the area was reconquered, Arzúa was repopulated with Basque people. Two pilgrim hospices were located here. This was the traditional stopping point before Santiago for medieval pilgrims.

We have a double room with ensuite bathroom in Pension Arzuá Peregrino (45€). It’s clean and had some extras like soap, toothbrushes (our original ones are shot), razor and a hairdryer. But, it is on the 4th floor without an elevator. After the very hilly 9 mile walk today and the climb to our room at checkin, being the “planners” that we are, we decided on a lunch/dinner combo at 4:00, so we only needed to make the climb and descent once.