It didn’t rain today as forecasted, but was a chilly 50F, clear with high clouds giving great visibility, mostly blocking the sun and creating near ideal photo conditions. And there was a constant flow of some pilgrims and lots of tourists.

Our walk today was a real challenge even though we covered less than 6 miles. Our reward for the challenging climb was increasingly spectacular scenery with the increasing altitude.

started at an elevation of 2200 ft and was pretty level, perhaps a slight incline toward the end of town. 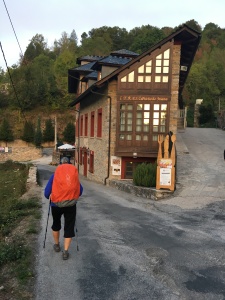 We stopped for a quick breakfast, not knowing how long before our next stop.

The two mile walk from Herrerías to La Faba started out with a short section of road which began to climb the mountain as the gap between the mountainsides was only wide enough for the shrinking stream at the bottom.

We then left the road onto a nice path through the woods which without warning made a sharp turn and became a steep, rocky path with switchbacks taking us up at least 800 ft to 3000 ft elevation.

When we reached La Faba we stopped at the first bar for a tasty concoction of orange and beet juice. And a much needed break. We also met a nice couple who lived in Calgary and he had attended WVa University. They are walking to Santiago (from SJPDP also) but when they finish, plan to return a week or so later to Sarria and walk the 100 km Camino with friends.

We continued on for another 1.5 miles to Laguna climbing another 800 ft to an altitude of 3800 ft. We stopped there for another break and chocolate cake and a drink.

The next 1.5 miles to O Cebreiro, we climbed another 400 ft to an altitude of around 4200 ft. and our destination for the day and the beginning of the Camino into the region of Galacia.

For us, today’s climb was similar in elevation to the Pyrenees but tougher in our judgement because of the more difficult walking surfaces. 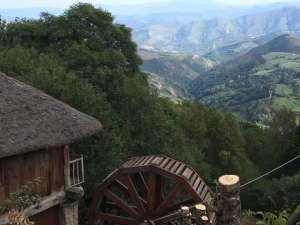 that retains its historic character. The albergue here is the first of many run by the Xunta, the governing body of Galicia. They are mostly purpose-built modern buildings or renovated schoolhouses with good facilities but a somewhat sterile atmosphere.

O Cebreiro bears evidence of occupation since ancient times, including a Roman way station that guarded the road to the Galician mines. The town grew to greater prominence with the pilgrim road.

Local tradition says that the Holy Grail (the chalice from which Jesus drank wine at the Last Supper) was hidden away in O Cebreiro. In the year 1300, a faithful parishioner trudged through a snowstorm to receive communion at the O Cebreiro church. The priest mocked the man for going to such trouble for just a bit of bread and wine. At that moment, the elements miraculously transformed into real flesh and blood. The virgin, still on display in the church, was said to have moved her head to have a better look. The event was later declared an official miracle by Pope Innocent VIII. When Queen Isabel passed through 200 years later she donated an ornate reliquary for the remains. The Galician coat of arms incorporates the chalice and host as central symbols.

O Cebreiro is interesting but crowded with pilgrims and tourists and souvenir shops & vendors. It seemed to be missing some of the more tempered Camino ambiance and spirit we have experienced up to now.

We stayed at the Casa VentaCelta (45€) which was ok, but we were disappointed in the cold, curt and not-helpful attitude of the bar and hotel staff, very uncharacteristic for our experiences of the previous 53 days of our Camino 2017.