It was a chilly 50F when we walked out of San Justo this morning just after 7 a.m.

On the edge of town we noticed two pilgrims, who we recognized were staying in our albergue/hotel last night, seated on a bench and the third walking hurriedly in our direction and passed us, back toward our hotel. We guessed he had forgotten something.

We walked on toward Astorga on sidewalk most of the way, then crossed a small, medieval stone bridge,

and shortly after crossed the railroad tracks via a very complex overpass.

At the top we got a good view of the city.

Once on the other side of the tracks, we meandered among automobile roundabouts until we began

climbing a very steep road up into the 2000 year old city of Astorga.

At the top, immediately on our right, was a church with archeological digs beside it,

At our left was a cafe/chocolate shop which seemed like a perfect spot for breakfast.

A few minutes later, the 3 pilgrims from our hotel also sat down for breakfast and after a brief chat we discovered they were from Ireland and as we guessed, the guy who was hurrying past us earlier, had left is walking poles at the albergue.

Today was market day in Astorga and as we walked thru the main plaza, vendors were busy setting up shop. 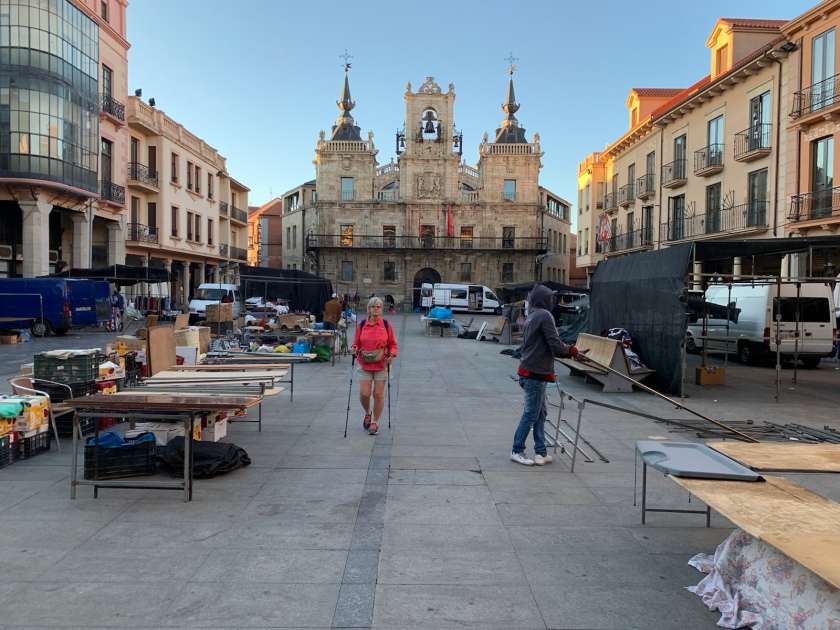 Astorga (pop.12,078) began as a Celtic settlement and developed into an important Roman city at the crossroads of the Via Trajana and the Vía de la Plata, as well as an important center for Christianity. According to legend, both St. James and St. Paul preached here. The bishopric of Astorga was one of the earliest Christian titles. The city passed to the Visigoths in the 5th century and was destroyed by the Muslims in 714, then reconquered by Ordoño I in the mid-9th century. After León was destroyed by Al-Mansur’s army, Astorga acted as the capital of the kingdom. The city flourished with the pilgrim trade and housed 21 pilgrim hospitals, the second most on the Camino Francés (after Burgos). One of these hosted Saint Francis of Assisi on his pilgrimage in 1214.

We walked on and stopped to take photos of two main landmarks of Astorga, the Gaudi Palace and the ominous Catedral (not a typo, that’s the way they spell “cathedral” in Spain) 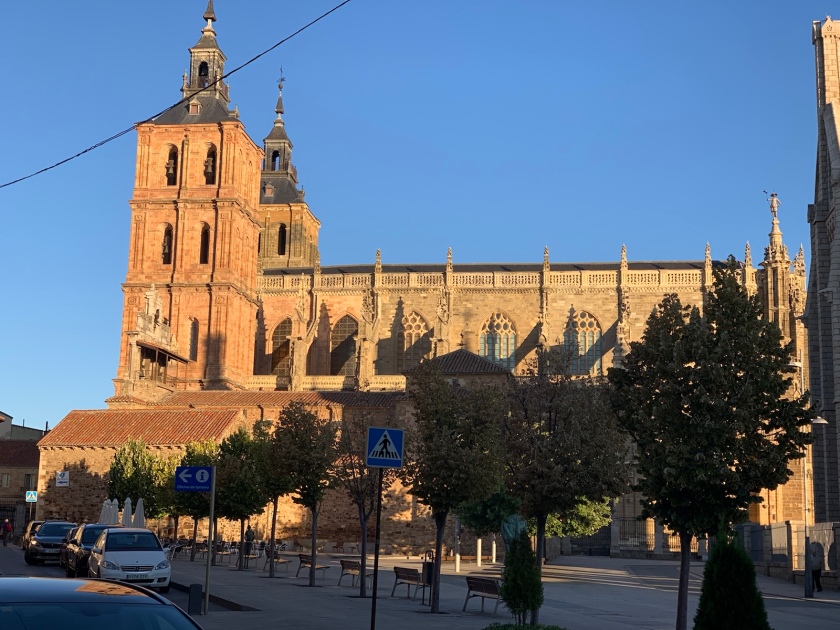 dwarfs the neaby buildings. It was locked tight this morning, 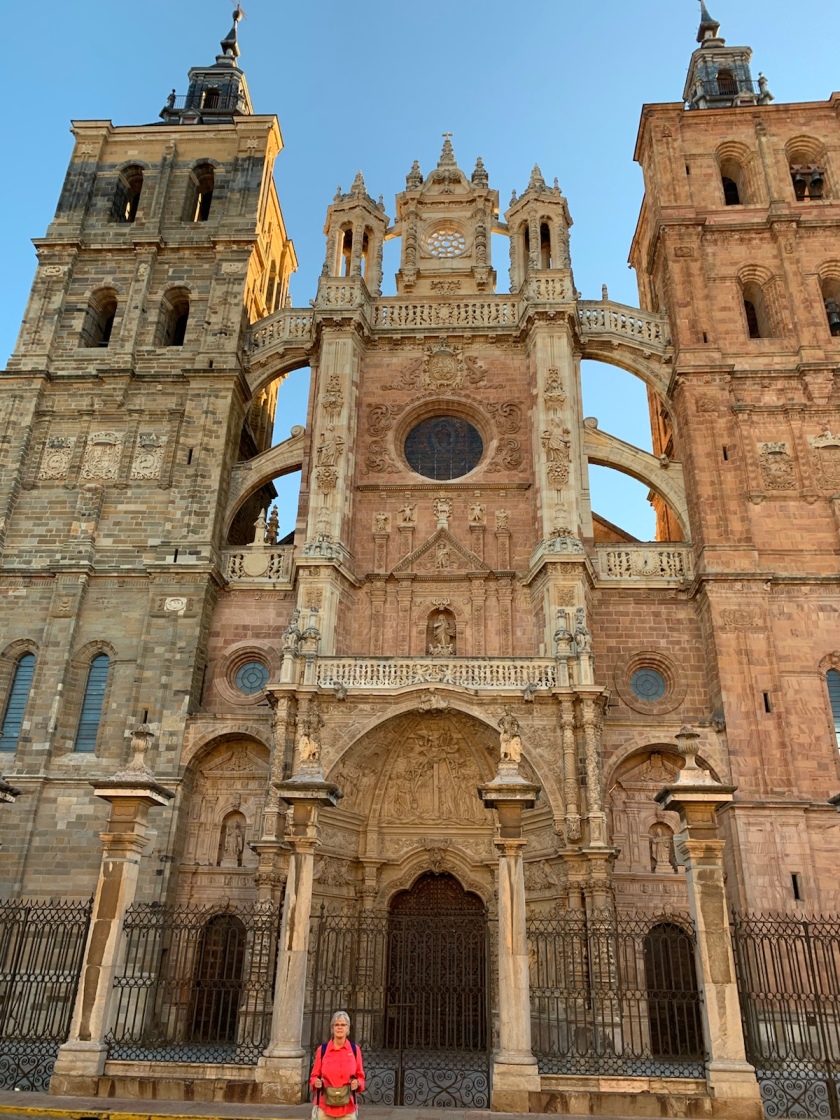 but the external details were impressive. 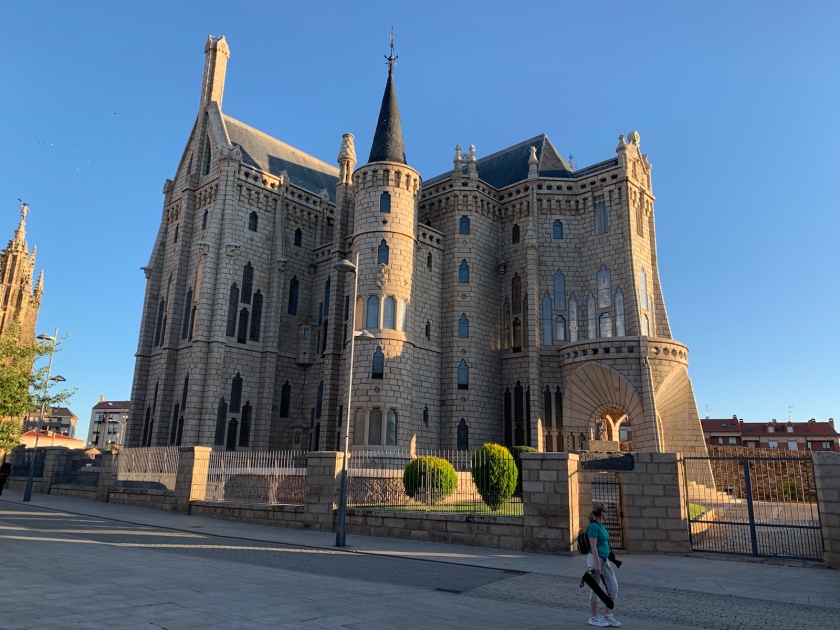 The Palacio de Gaudí, was a palace for Archbishop Juan Bautista Grau Villespinós until his death, when it sat empty until serving as a military headquarters for the Falange movement. 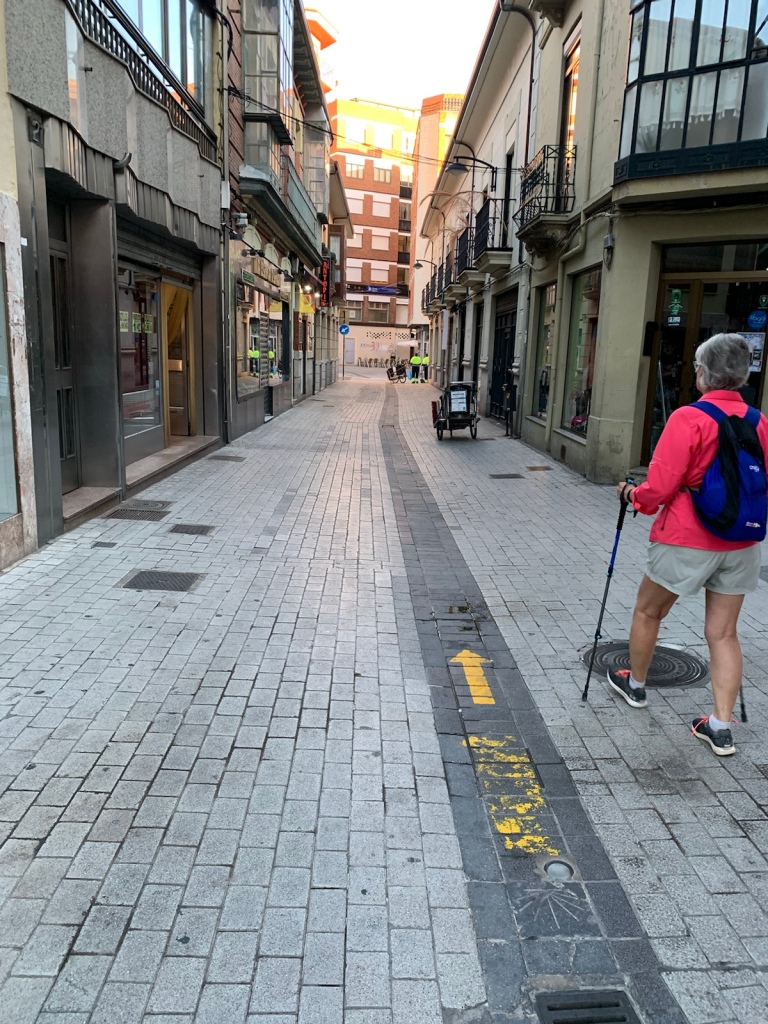 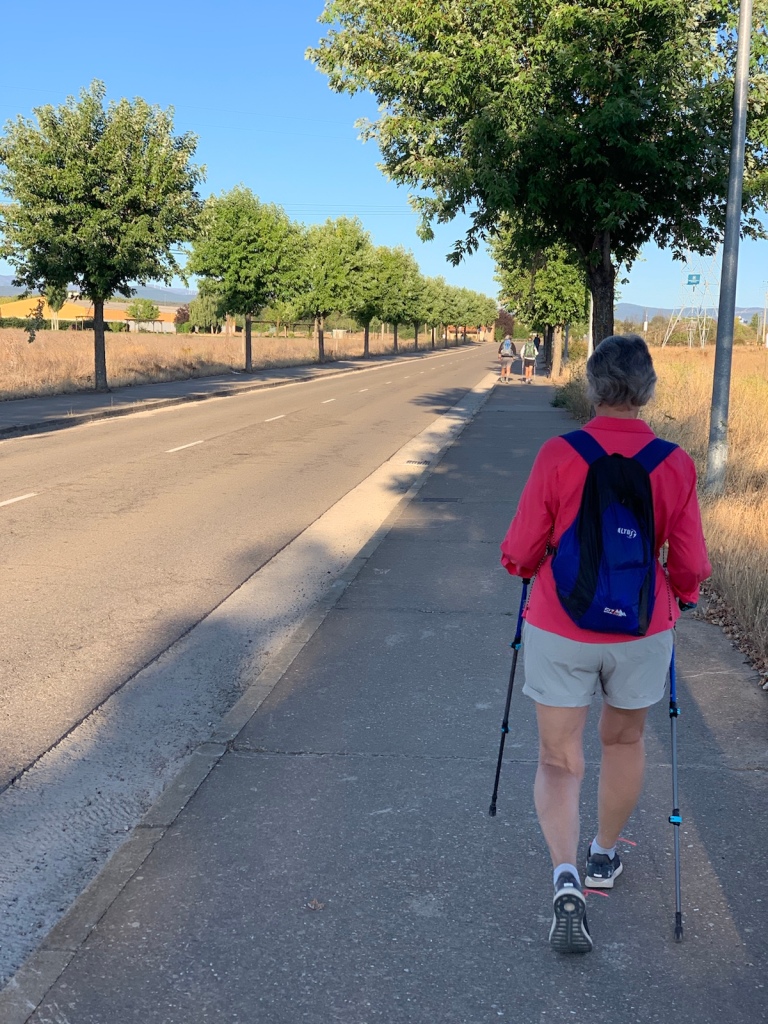 and began a gradual ascent toward the Irago Mountains.

We made another brief stop in the charming Maragato village of Murias de Rechivaldo. 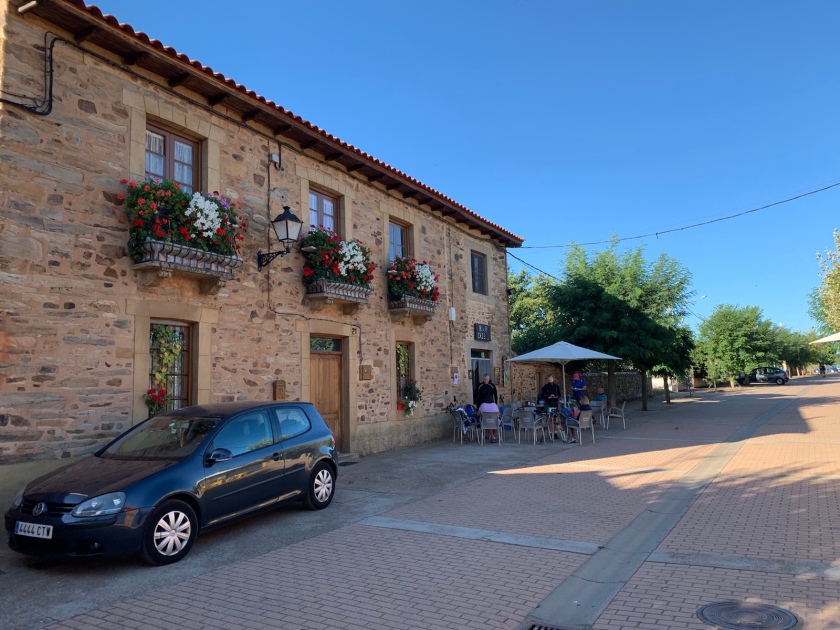 The Maragato culture, is centralized in about 40 villages around Astorga. This mysterious group is rumored to be descended from the Berbers of North Africa, who arrived with the Muslim conquest in the 8th century and later converting to Christianity. Maragato men traditionally worked as muleteers, mule drivers who transported goods (especially fish and gold) around the peninsula.

Restaurants in the area offer Cocido Maragato, an extremely filling meal that is served in a kind of “reverse order,” beginning with a hearty meat dish, such as blood sausage, chicken, pork, pig’s ear, pig’s snout, bacon or chorizo, followed by the vegetables (usually chickpeas and cabbage) and finished off with a thick noodle soup and dessert.

It being only 9:30, fortunately, we didn’t partake of the Cocido Maragato today, 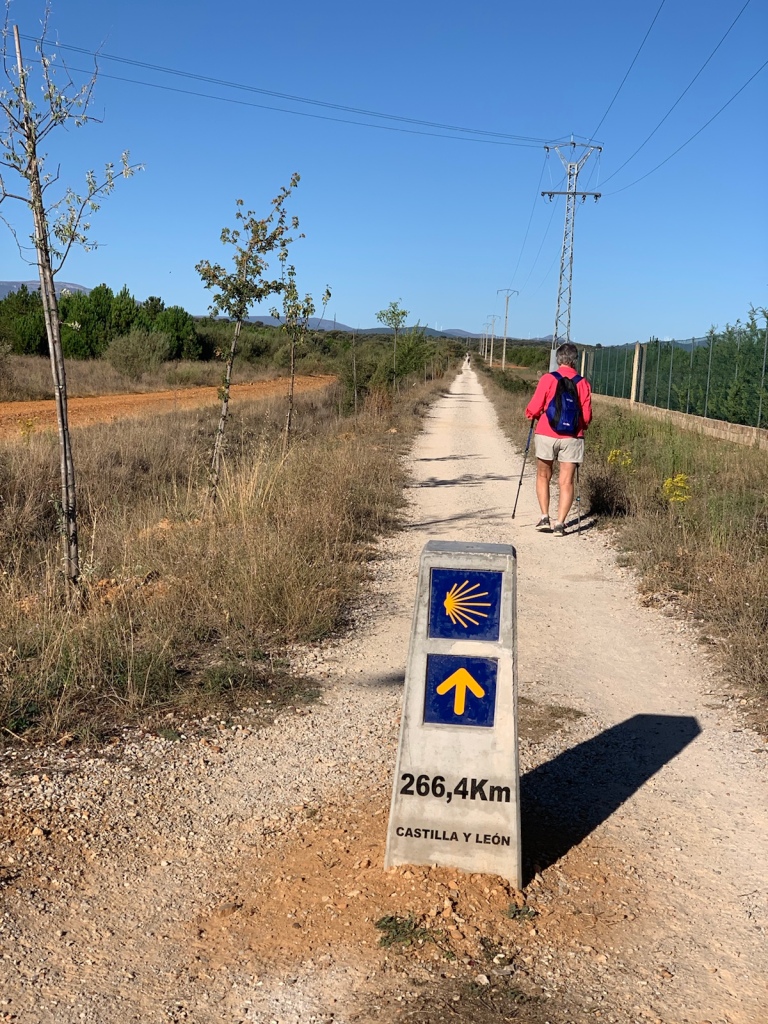 and instead, began the gradual 3 mile climb into the, all but deserted, Santa Catalina de Somoza (pop. 30), where we stopped for the day at Albergue El Caminante. 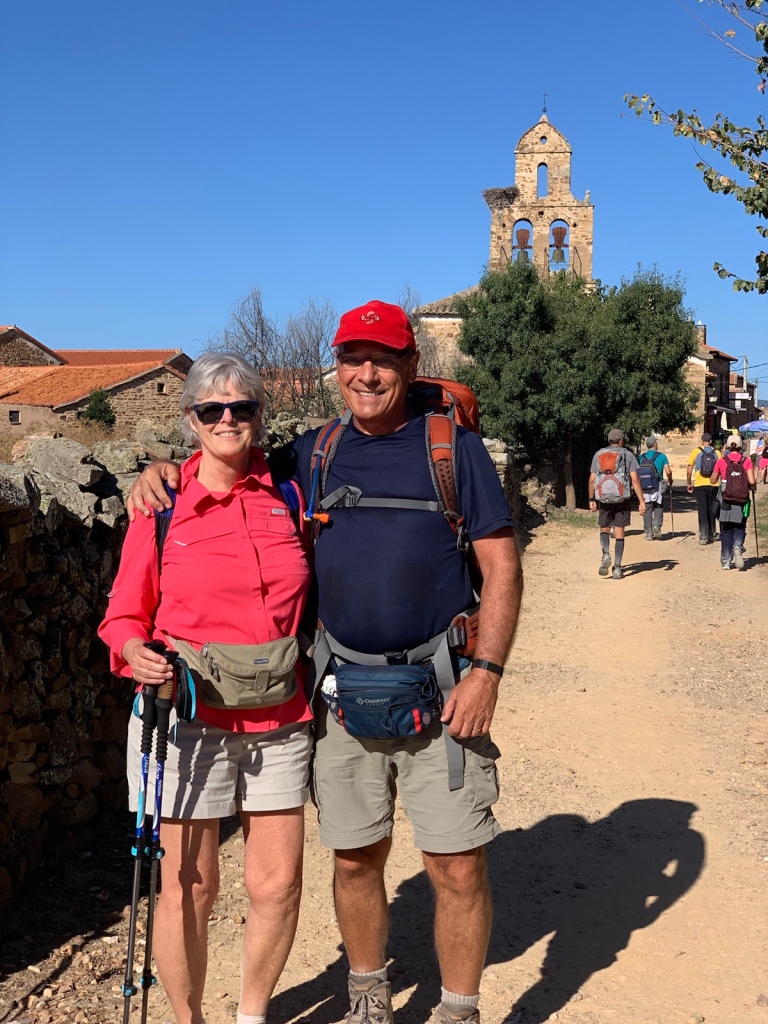 When we attempted to checkin to the El Caminante, the lady at reception said she had no reservation for us. Jim had personally called and was certain that his impeccable command of Catalan could not have contributed to the reservation showing up in her bookings for September 6 and not today. 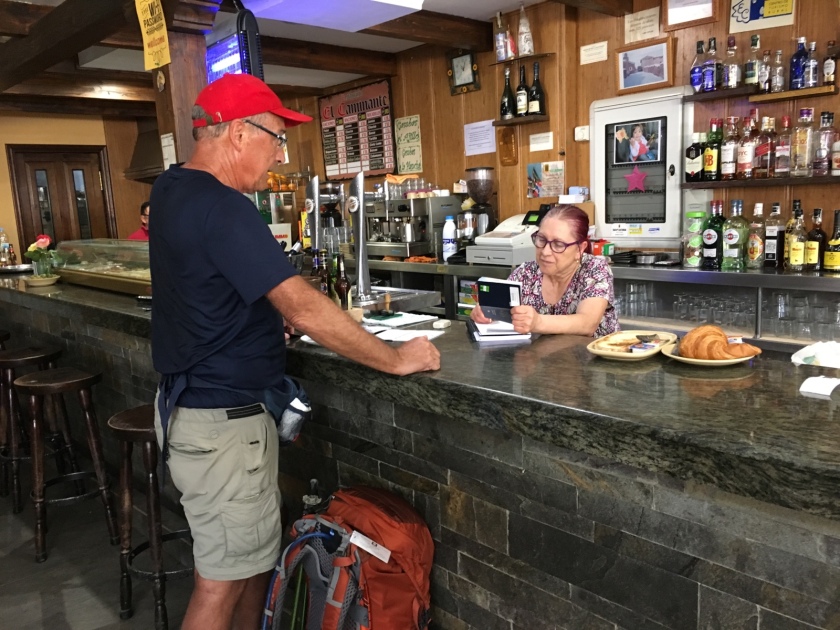 Nevertheless, Jim asked if a room was available, once all agreed that we had no reservation, and the response was yes. We remembered the lady from our stay here in 2017 so we were puzzled as she struggled to transfer the necessary information from our passports to her registry. Jim actually assisted her in distinguishing between first names, last names, birth dates, etc.

When all the formalities were completed, we were escorted to our room, (next door to the one we had in 2017) and given the key, freeing us to began our chores.

We had pizza for lunch at the other albergue/bar/restaurant in this outpost that reminds us of an old western town in the U.S. We stayed at Albergue San Blas in 2015 and wanted to spread our euros around to stimulate the local economy as much as possible.

We had a simple pilgrim dinner, just the two of us in the El Caminante comidor (dining room) with 6 of the 30 village residents playing cards in the adjacent room, while the overhead modern flat screen TV was playing a Jimmy Stewart western. We wondered if it might have been filmed here, years ago.

We checked the small Iglesia de Santa Maria, which is only unlocked for Sunday mass and found the door cracked while an apparent parishioner was preparing for the next service.

Finally after prior unsuccessful visits in 2015 and 2017, we entered and sat reverently while she worked, then quietly left her to her duties and returned the few steps to El Caminante.

We paused on the balcony overlooking the courtyard of this diamond-in-the-rough albergue and marveled at the efforts required to nurture the abundant plantings that filled the space, and retired to our room for the night.