The walk from El Acebo to Molinaseca included some very difficult paths dominated by protruding and loose shale. We were frequently slowed to a snails pace by truly terrifying treacherous terrain. Linda twisted an ankle in this area on our first Camino in 2015, so we were perhaps more cautious this time to prevent a Camino ending injury.

Whenever possible we walked on the parallel narrow asphalt road, but returned to the path when the road swung a significant distance away from the path.

From Molinaseca to Ponferrada we walked on sidewalks and a path that supposedly was a shortcut by 1.2 miles, but only took us into the city in a roundabout way with no saving in time or distance.

The weather was chilly but the sky was clear so we were rewarded with beautiful scenery for our efforts. 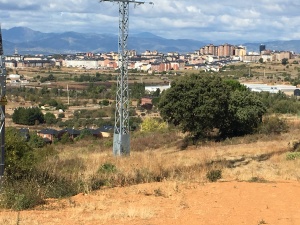 Ponferrada started off as a Celtic settlement, followed by a Roman mining town. The city was destroyed first by the Visigoths and then Muslim invaders. After the Reconquista, Bishop Osmundo of Astorga commissioned a pilgrim bridge here, which was unusually constructed with steel beams, giving the city its modern name. Ponferrada was a booming pilgrimage town, with diverse merchants including Franks and Jews, who were protected during a 15th-century restriction that called for segregating communities. The railroad came to the city in 1882 and in the 1940s the town grew with the coal industry.

According to legend, the castle holds all kinds of secret Templar symbolism, such as the 12 towers representing the 12 months or the 12 disciples.

Iglesia de Santa María de la Encina on the Plaza Encinas, houses an image of Mary said to be originally in the Astorga cathedral, but it was hidden in the 9th century for protection from invading Muslims.

Years later, the image was miraculously found in an oak tree, hence the name “Our Lady of the Oak.”

There is a statue in the plaza depicting the miracle.