What a difference a day makes. We were beginning to have some negative feelings based on the walks before and after León.

But this morning, even though we were again walking along N-120, the Camino started out with a walk in the woods, then a little later, found some more trees that sheltered us a bit from the traffic noise and even took us by some blackberries.

Our breakfast stop in San Martin del Camino was also positive with a beautifully decorated albergue, very pleasant owner and monstrous cafe con leches and tostatas for only 3€ each… oh, and a spotless bathroom.

We didn’t consider walking on asphalt today because of the high level of Monday morning traffic. So we stuck to the path, which also was variably pleasant.

About 6 miles into our walk we came to Hospital del Órbigo (pop.1031), a lovely town with beautiful cobblestone and brick streets, well maintained buildings with colorfully filled window flower boxes especially in the old town section and perhaps the most impressive bridge we’ve seen.

We picked a bar with a good vantage point and stopped for an OJ while we admired the bridge. 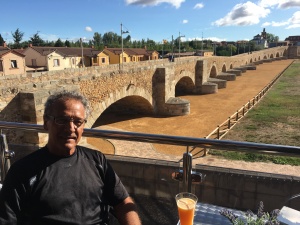 The impressive 13th century Gothic bridge over the Río Órbigo is the site of a legendary medieval jousting competition. Don Suero de Quiñones, a wealthy Leonese knight, was rejected by the woman he loved. In his heartbreak, he locked his neck in an iron collar and swore he would not take it off until he had defeated 300 knights in jousting. The call went out, and knights from all over the kingdom came in the Holy Year of 1434. Quiñones succeeded in his quest, freeing him from the torment of love. He took off the collar and made a pilgrimage to Santiago where he left a bejeweled bracelet, which can still be seen in the cathedral museum. The bridge became known as El Paso Honroso “the Honorable Pass.”

We returned to the Camino and as we walked out of town we were engulfed by 20-30 apparent tourists.

How could we tell? Well, they all were wearing clean, unwrinkled clothing. The men’s shirts and women’s blouses were colorful, smart casual at the least, their shoes were not dusty and they all had nice, new small day packs.

Jim surveiled (profiled) the group, identified and walked alongside the leader and opened a conversation. The leader was Alberto, an Italian, and the group was traveling by bus, walking sections of the Camino that held particular interest for the group. The were traveling for 30 days, had begun in Roncesvalles, skipped the entire meseta and were eventually targeting Santiago. Countries represented in the group were Italy, Great Britain, USA, Spain, Japan and China. When Alberto heard we were from South Carolina he immediately was concerned about our home and family due to Hurricanes Irma. We assured him that we were in contact with family and all were safe.

We occupy the only habitacion doble in the albergue. It has two bathrooms, men’s and womens with WC, showers and sinks.

Shortly after we arrived, checked in and began our chores, we met Ken, a retired Lutheran Minister from St Marks church in Williamsport, Pa! This is his second Camino and like us, he is going the full 500 miles this time after doing the Camino in parts his first time.

The albergue has a communal kitchen and so we shopped at the village “supermarket” for canned tuna, baguette, olives and mayonnaise and fixed our own tuna bocadillos for lunch. We also bought a large melon, which we shared with the other pilgrims in the albergue. 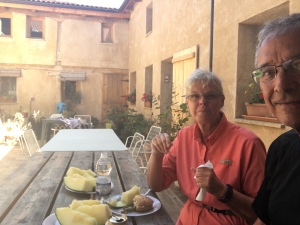 The albergue also has a centrifuge. Why? To ring out hand washed clothes. And it really works! Jim washed several items, used every muscle in his upper body to squeeze the water out and then got another pint of water out with the centrifuge. Needless to say, the clothes were dry in less than an hour.

Our pilgrim dinner was prepared by our hostess and albergue owner, Christine, originally from Belgium. We had a nice pumpkin squash soup, a mixed salad, delicious tortillas and rice pudding for dessert… and delightful interaction with fellow pilgrims.